Together for a better future: entrepreneur expands production with EU4Business loan 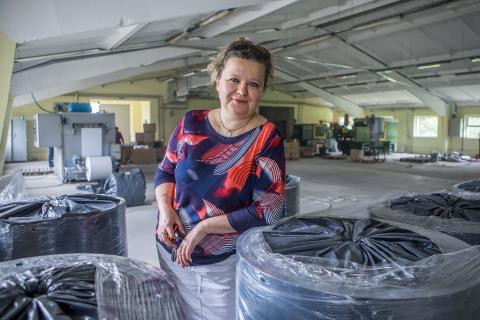 A Lviv entrepreneur founded a company supplying one of the most attractive markets in the world – the European Union. New equipment purchased with an EU4Business loan will allow her to increase deliveries by 15%.

“Show us the most beautiful equipment,” we ask Lviv entrepreneur Nataliya Nichoga before a photo shoot at her production facility.

“The most beautiful is the one that works. And all of mine work!” she immediately responds, leading us to a spacious workshop where dozens of machines are moulding disposable knives, forks and spoons of various colours.

This is the leading product of the YuON company, which Nataliya Nichoga founded in the early 1990s. Every month, the company turns out tens of millions of cutlery items, processing 100 tonnes of polypropylene. This modern material is recyclable: it can be used to produce anything from furniture to plastic pipes, special fabrics, carpeting and many other products. YuON’s production is fully in line with the European strategy for plastics, according to which all plastic packaging on the EU market will be recyclable by 2030.

Most of the products are sent to the European Union. The Ukrainian cutlery is most liked in Poland, the Czech Republic and Hungary.

Since the beginning of this year, the Lviv company has started offering its European consumers a new type of product – large plastic plates. The novelty will allow the enterprise to increase the volume of production by 10 to 15 per cent. And at the same time, YuON will have no costs in expanding sales channels or building new ones, as both disposable cutlery and plates go to the same buyers. “Well-established sales are key for a business," says the entrepreneur.

The new products will be produced on new modern equipment, a Ukrainian thermoforming line worth more than 1 million hryvnias. To upgrade the production capacity, Nichoga took out a loan at KredoBank, co-funded by the European Union under the EU4Business initiative.

The entrepreneur installed the modern equipment at her new production site: last November she bought a workshop in the village of Velyki Pidlisky near Lviv. The workshop covers two thousand square metres.

YuON is a family firm. This is even evident from its name, which is made up of the initials of Nichoga and her children: Yuri, Olga, Nataliya. Nichoga’s children have grown up amid the production, as she had to deal with the business when her elder daughter was just four years old, and she herself was 22.

It was a very dramatic start. After graduating, Nataliya got a job at a trading company and promptly landed a profitable contract for the supply of pantyhose from Poland. However, the owner of the company did not appreciate her efforts and rejected the contract. “I had to quickly register a company and take up that pantyhose myself," recalls the businesswoman. Fortunately, the Polish goods sold quickly and Nataliya’s company soon began to trade in a range of products. Some years later she bought a disposable cutlery production business.

Nataliya admits that, as a child, her daughter was more likely to be at the production site than at the kindergarten. But now she knows the family business throughout and has been working at the company since she turned 16. Nichoga Jr. heads one of the most important areas in the company – the sales organisation. She started with signing contracts, working from the head office in Lviv, and five years ago she registered a company in Poland in order better to serve clients from the European Union. Nataliya talks about this with evident pride.

Moreover, her daughter’s work is very successful: 80 per cent of produced utensils are sent to the EU market, which prefers more expensive products than the Ukrainian market, but the competition among the European producers is stiff. However, YuON has a key advantage – the speed of reaction to customer needs. “We are more agile,” Nataliya says, so if a buyer urgently needs, for example, 15 boxes of red forks, then in a week the product is there. “But it’s hard to remain on the European market,” she admits.

“Tastes in tableware we produce differ between Ukrainians and Europeans,” says the entrepreneur. “Ukrainians prefer smaller plates – 20 centimetres in diameter, whereas Europeans want 22 centimetres.” Nataliya tells us this on the way to the new production site, the one with the modern thermoforming machine.

The equipment is still not at the full daily utilisation rate, but has already managed to turn out half a million plates for customers in Poland, employing three residents of Velyki Pidlisky village. Nataliya’s son Yuri will be there especially for us, to switch on the line. He is an electrician by education and is responsible for launching new equipment at the company. “The adjustment is difficult,” Nataliya confesses. “This is a new type of processing for us.”

But the loan for the purchase of the equipment, which YuON took out at KredoBank, is nothing new for the company. Nataliya says that she has been developing the business on loan money all along, she has always been very timely in repaying her loans, and a good credit history has helped her a lot. Without this loan, she would have had to postpone the investment in the production expansion. After buying the new production site at the end of 2017, YuON did not have any free cash.

The entrepreneur is already calling this investment a success. In addition to the plates, she is preparing to produce another type of product at the new facility – stands for children's toys.

YuON took the investment loan from KredoBank, which was granted within the cooperation framework between the German-Ukrainian Fund and KfW Bank for financing SMEs Investment Projects with support from the European Union under the EU4Business initiative. The Fund’s work is aimed at lending to SMEs in Ukraine that cannot afford high-interest loans.

YuON received an investment loan from KredoBank, in the framework of the German-Ukrainian Fund and KfW’s SME Finance Facility, supported by the European Union as part of its EU4Business initiative. The Facility seeks to stimulate local currency lending for SMEs in Ukraine who cannot afford the high costs of borrowing.

The EU4Business initiative brings together all EU programmes assisting SME and private sector development in Ukraine. Between 2009 and 2017, the EU has contributed €156 million under the initiative in Ukraine, triggering €189 million worth of loans to Ukrainian companies, supporting 1,700 enterprises and creating almost 6,000 new jobs.

The article was prepared for the EU4Business initiative. 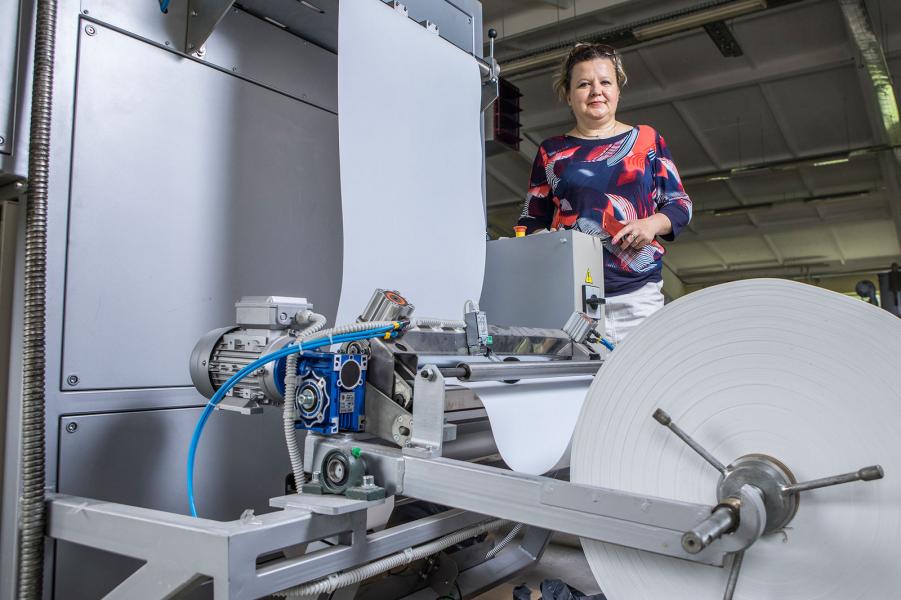 On the production line at YuON.

Plastic plates on the production line at YuON 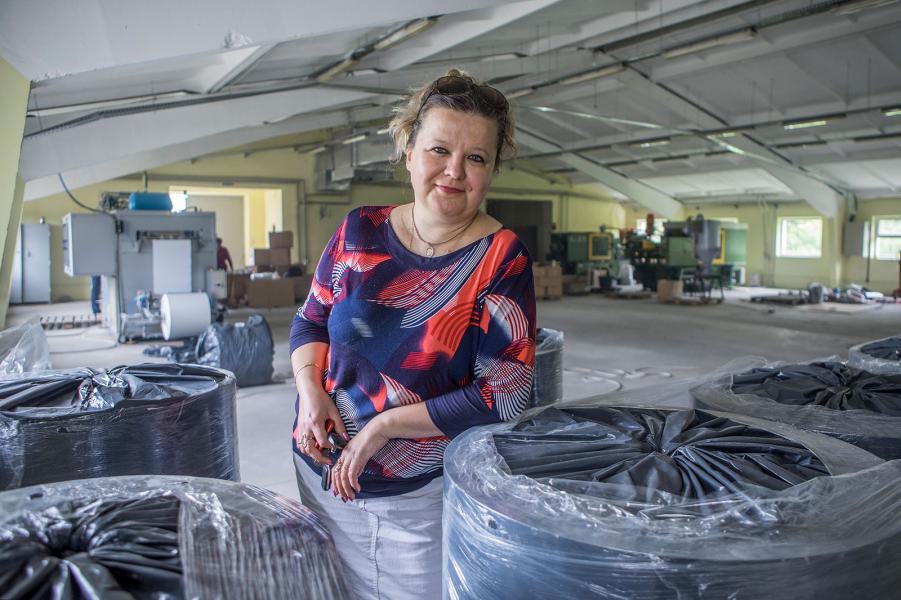 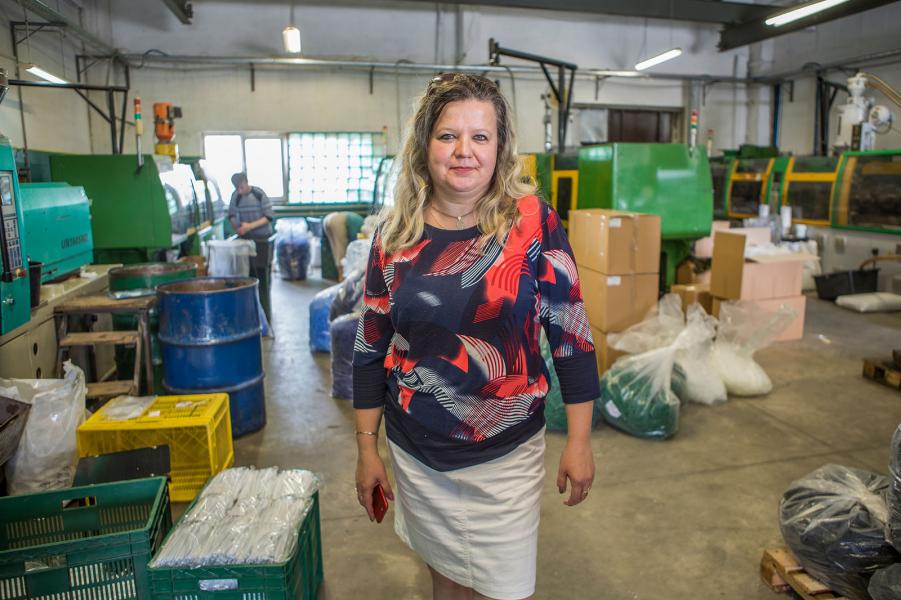