Sea buckthorn: the Moldovan farm investing in an extraordinary ‘super fruit’ – with help from the EIB and EU4Business 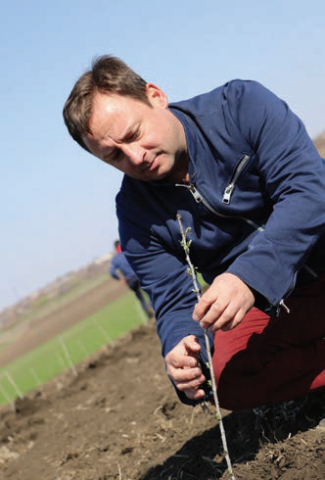 The nutritional and medicinal value of sea buckthorn – a flowering shrub that produces compact orange fruit – has been known in Europe for generations. Yet despite its growing reputation as a “super fruit”, particularly beneficial for treating skin disorders, until now, there were no producers in the Republic of Moldova able to deliver industrial quantities of this curative product.

“The thought of planting white sea buckthorn came to me about three years ago,”says Rodion Sobchenko, administrator of ‘Riomax-Prim’. “However, I preferred to study very well the possibilities of selling and processing this product prior to starting this project.” Now, with the help of EU4Business and the European Investment Bank, through the Fruit Garden of Moldova project, Sobchenko is one step closer to achieving his dream.

Riomax-Prim owns about 34 hectares of arable land, six of which have been set aside for an orchard of white sea buckthorn. Under the Fruit Garden Project, the company received an investment loan of about €24,000. In total, the company has invested about €52,000 for the purchase of sea buckthorn seedlings, the processing of the land and the sowing of the planting material.

Sea buckthorn is a shrub that can grow up to 5-6 meters tall. The branches have sharp, long thorns, and the silver-green leaves are narrow. The main part used in phyto-therapy is the fruit.

“After I succeeded to contract a credit for development from the Fruit Garden project, I decided to set up a plantation over an area of 6 hectares,”explains Sobchenko. “For me, the conditions for contracting the preferential credit were crucial. For instance, the exemption of the Value Added Tax (VAT), customs duties and payments on imports of saplings from the European Union allowed me to save about 30% of the invested money. Another important factor is that the loans are granted for a period of up to ten years and the grace period of up to four years allow repayment of the credit when you already have an income from the planted saplings.”

The main part used in phyto-therapy is the fruit of the sea buckthorn, rich in vitamin C and oil, which is extremely beneficial for curing skin disorders. Also, the juice produced from the fruits can be consumed as such or turned into syrup and has multiple health benefits. The fruit contains 10 times more vitamin C than lemons do, as well as other vitamins, carotenoids, minerals, acids and complex oils. Sea buckthorn also acts as an antioxidant, emollient, cyto-protector, and immune-stimulator, with depurative, anti-inflammatory and healing properties.

Sobchenko says the company filed all the necessary documents for eco certification of sea buckthorn: “The seedlings that we purchased are already certified according to European standards. Although the process of certification is a complex procedure for us, I consider it to be worth it because it opens wide prospects for marketing the finished product, which, of course, I will be able to harvest in about three years from now.”

Until that moment, Riomax-Prim has been doing its homework: “We have studied very well the integration potential of this product on the local and European markets. Sea buckthorn can be marketed fresh as well as frozen. We have already talked with several canning producers from Moldova about a future collaboration in order to produce sea buckthorn juice and oil.”

Sea buckthorn concoctions are recommended for liver and eye infections, respiratory viruses, eczemas, gastric ulcer and even for colds. The bark and the buds can also be used in the preparation of curative tinctures and extracts in order to enhance immunity, tone the nervous system and treat respiratory and cardiovascular diseases.

As a result of the investments made, Riomax-Prim will be profitable and will be able to create five jobs. Another 20 seasonal workers will be employed to harvest the sea buckthorn in regions of the country where the unemployment rate is prominent.

Fruit Garden of Moldova is part of the EU-funded DCFTA Initiative East, implemented by the government of the Republic of Moldova and the European Investment Bank under the EU4Business initiative.

The DCFTA Initiative East – funded by the EU under the EU4Business initiative – aims to strengthen economic development in the countries which have signed an association agreement with the EU - namely Georgia, Moldova and Ukraine - by providing targeted financial and technical support to small and medium-sized enterprises (SMEs) in these three countries.