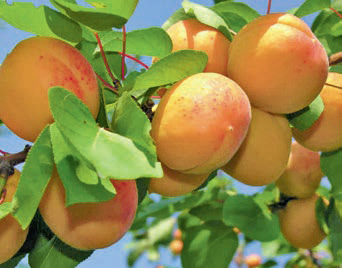 Constantin Andriuţă from the village of Şeptelici near Soroca has always been successful in agricultural business. Since graduating in agribusiness in 1996, his business has grown and he has succeeded in diversifying his crops, with a particular focus on horticulture. He planted apple, pear, apricot, cherry, walnut and peach orchards, eventually joining up with four other agricultural enterprises to create the C.V.A. Virocagro cooperative.

“We own 63 hectares of agricultural land. We also have a long-term lease of about 350 hectares. We produce over 375 tons of apples and pears annually. We also harvest about 161 tons of prunes and apricots. We have grapes, about 50 hectares and 4 hectares of berries as well. A big problem for us was the lack of cold storage,”said Andriuţă.“That's why we decided to build a 560-tonne refrigerator.” Which is where EU4Business and the European Investment Bank stepped in to help, through the Fruit Gardens of Moldova project.

With the support of the Fruit Garden of Moldova project, the members of the cooperative have invested over €513,000 – with €256,000 coming in the form of a loan contracted under the project.

The low interest rate and the speed of access to credit from the European Investment Bank enabled the rapid construction of the refrigerator. The exemption of customs duties and the application of a ‘Zero VAT’ rate along with the long-term credit make the financing offered within the project highly attractive to horticulturists.

The refrigerator means higher income for the farms, because they are no longer dependent on intermediaries. Through such investments, fruit produced in Moldova are beginning to reach markets in the European Union. Applying modern technologies makes horticultural products more competitive and offers clear prospects for the sector’s development.

With the loan, Andriuţă has also been able to buy high-performance machines to ensure his business’s development – which has translated into extra jobs: “We hired 11 people in addition to the 39 who previously worked in our company. I pay them a decent salary that also provides them with a sustainable source of income here in our home town,”he says.

As part of the investment project the cooperative planted another 25 hectares of orchards, that Andriuţăhopes will produce fruit in three or four years.

The new infrastructure is crucial if he is to take advantage of that growth: “I am certain that without the investments we made in post-harvest infrastructure, i.e. refrigerators, sorting and packaging lines, etc. there would have been very few chances for us to cope with the fierce competition on the market.”

“The investments we made took us out of the vicious circle of being dependent on intermediaries,”he adds. “For example, last year, because I did not have the refrigerator, I had to sell apples from the orchard at just 5 lei, whereas if I had had the refrigerator I could have sold them after a single month of storage, at a price of 11 lei per kilogramme.”

Fruit Garden of Moldova is part of the EU-funded DCFTA Initiative East, implemented by the government of the Republic of Moldova and the European Investment Bank under the EU4Business initiative.

The DCFTA Initiative East – funded by the EU under the EU4Business initiative – aims to strengthen economic development in the countries which have signed an association agreement with the EU - namely Georgia, Moldova and Ukraine - by providing targeted financial and technical support to small and medium-sized enterprises (SMEs) in these three countries.