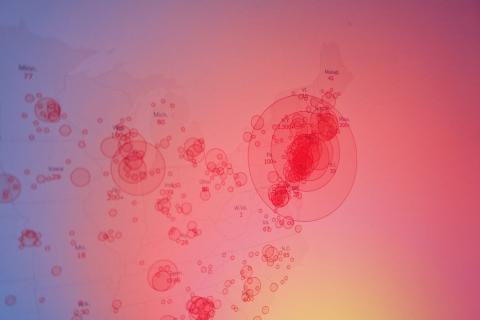 In early April, 10,000 express COVID-19 tests arrived in three oblasts of Western Ukraine—Vinnytsia, Ternopil and Khmelnytskiy. The whole process—from the search for a test to delivery—was handled by six small businesses that are part of a cluster of bridal wear manufacturers called Podillya Wedding Group. The cluster was launched in 2018 with the support of EU under the EU4Business initiative, and the Khmelnytskiy Municipal Administration.

In early March, the Podillya Wedding Group cluster, all makers of bridal wear, began to receive requests from their customers from other parts of Ukraine to send protective masks along with wedding dresses. At that time, the masks cost less than UAH 1 and were available in pharmacies in the western oblasts. In the meantime, the media began to actively discuss the problem of lack of rapid tests throughout Ukraine.

“During the first days of the quarantine in Ukraine, we turned to our Mayor and asked how our cluster might help,” cluster leader Kateryna Markovska recalls. “The Mayor suggested buying rapid tests, since at that time there were only 25 tests in the whole of Khmelnytsky Oblast. Everyone understood that this wouldn’t be enough even for testing doctors. But state institutions have a hard time making purchases quickly because of red tape.”

Vinnytsia and Ternopil City Administrations joined the initiative. In one day, the entrepreneurs managed to raise $40,000.

During 18 months since its founding with support from EU4Business, the Podillya Wedding Group cluster has expanded its international relations. The Chinese partners helped find a trusted COVID-19 test vendor who also supplied tests to a factory in Germany.

“Without our Chinese partners, we were unlikely to find tests for $2-4. The average price of many middle-men at that point was at least $10,” says Markovska. "We chose the tests for $4, because they can diagnose both coronavirus carriers and those who have had the virus within the previous 30 days."

The whole process, from fundraising to the actual arrival of the tests in Khmelnytskiy, took 3 weeks. It still involved some red tape. Despite Law #530-IX, which exempts imported medical supplies from the VAT, Customs held up the cargo until an additional 23% of the cost of the goods was paid.

“If the city of Khmelnytskiy had tried to procure the tests through standard procedures, we would hardly see them even today,” says Markovska. “I’m pleased that EU4Business initiative combined the capabilities of our small businesses into a cluster has come in handy during this crisis. We wouldn’t have been able to pull off such a significant project individually, buying and bringing 10,000 tests to Ukraine in 3 weeks!”

How EU helped set up the Podillya Wedding Group cluster

In 2018, EU4Business organized a workshop in Lviv on how to set up business clusters as part of the “Support for Cluster Initiatives in the Textile Sector” project. The workshop was facilitated by Ifor Ffowcs-Williams, a well-known expert and the author of methodology on cluster development.

After the workshop series and under an extended project to support cluster initiatives, two clusters were identified in Khmelnytskiy: the Podillya Wedding Group and the Podillya Women’s Apparel Cluster.

Today, the Podillya Wedding Group is the largest association of bridal wear manufacturers in Ukraine.

In 2019, with the support of EU4Business, the Podillya Wedding Group participated in Expo Wedding Fashion Week, an international exhibition. The cluster invited 300 of its client buyers from different countries: Argentina, China, Taiwan, Singapore, and almost all European countries. This gave Ukrainian SMEs in the clothing sector that had not had any opportunity to enter international markets before to raise their profiles.

In December 2019, a trade mission representing the cluster enjoyed a successful visit to France with the support of the EU4Business initiative, which helped organize B2B meetings and showings. Thanks to the clustering of companies and joint participation in international and national exhibitions, some companies have increased their sales by 40% in 2018-2019.